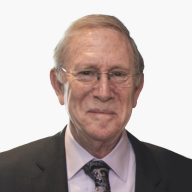 Larry began his career at McDermott in 1964 (attorney number 56). He served as Firm chair from 1991 to 2003—the longest tenure of any chair other than the Firm’s founder. Now retired from the practice of law, Larry is active in a number of volunteer roles in the Chicago area.

Tell us how you came to join the Firm and about your early days as an associate.

One of my law professors advised me to consider becoming a tax attorney because I was a CPA. At the time, McDermott was (and still is) known as the premiere tax firm in Chicago, and that professor introduced me to Emory Naylor, then the chair of the Tax Department (and later the chair of the Firm). That introduction led to an interview and an offer to join McDermott. For four and a half years, I shared a small windowless office with another associate, Al Olson. We then “graduated” to an office with a window (but no view). However, the joy of that move was quickly diminished one day when Emory saw we had opened the window about 2 inches to get some air. He was worried that client papers would fly out of the window. So much for the window.

Although you started out as a tax lawyer, you went on to start McDermott’s Health Industry Advisory Practice Group. How did that come about?

In mid-1976 6-8 new clients—all not-for-profit hospitals—came to a Firm associate through one of his contacts, all wanting to engage in the same type project. I asked Emory if I could spend substantial time to learn what was going on in the healthcare industry to account for this. He told me I could reduce my billable time to a 70% level and spend “the other 70%” of my time educating myself on the industry. His math turned out to be consistent with the reality. I attended countless hospital or related conferences, I read numerous healthcare publications, and I spent a lot of time with a client, Hinsdale Hospital, to learn as much as I could about the industry. In mid-1977, I developed a plan to form a nationwide health law practice at the Firm. I identified what would be necessary for such a practice to be competitive and successful. I presented my proposal to Emory and was given the green light to work on putting the pieces in place. (Two of those pieces were the opening of Boston and Los Angeles offices.)

Did you ever envision that you might become chair?

I suppose I thought about it when I was a younger lawyer. I do remember the night of the election. The first person to know, outside of the Management Committee, was my legal assistant, Carol Heim. Then my wife. Later that evening we celebrated with John and Era Pennell. John was a retired McDermott partner and was my mentor.

"Throughout my time as chairman I received the support and cooperation of the Management Committee and the partners, including, most importantly, valuable and thoughtful suggestions and criticisms. Working together I believe we accomplished a great deal."

You were Firm chair for almost 13 years. Any reflections from that period of your career?

So many highlights and firsts happened during that timeframe, but I do recall addressing the partnership at a retreat not long after I became chairman. I shared my vision for the Firm with the partners. One of the things I told them was that our unit value had to grow significantly. I told them the unit value I projected for that year, which was above anything we had previously achieved. I think there were many doubters in the room, but I felt I knew the various profit levers that needed to be pulled to get to that value and I knew I could count on my partners to do what was needed from them. We not only made the value but exceeded it by a bit. Throughout my time as chairman I received the support and cooperation of the Management Committee and the partners, including, most importantly, valuable and thoughtful suggestions and criticisms. Working together I believe we accomplished a great deal.

How do you and your wife spend your time now?

We don’t really have a lot of free time. We are active in the lives of our children (both lawyers but only one is practicing) and our 4 grandchildren (not lawyers!) and are fortunate they all live within 10 minutes of us. We are active in Holocaust education and in a program we established at our synagogue where we provide financial assistance to members’ children attending Jewish overnight camps and participating in group trips to Israel. We are lifelong learners and take advantage of classes, lectures and concerts in town. We also founded Shift:Englewood, which provides a free disciplined and focused music program to elementary school children in Chicago’s intercity Englewood community. We focus on classical music as well as pieces our students compose. We started small, with about 10 students at one school, and now we have 200 students in four schools. Our goal is to help our students develop personal skills/characteristics (e.g., self-respect, self-confidence and the ability to work with others) that will better enable them to move forward to a brighter future.

Any final thoughts as you reflect on your time at McDermott?

I was a tax lawyer for 13 years, a health lawyer for 13 years and chair of the Firm for 13 years. I loved my time in each of those roles (well, most of the time). I never looked back when I moved from one role to another. I learned the true meaning of excellence, the importance of teamwork and the important principle that what’s good for the Firm is good for me and what’s bad for the Firm is bad for me. I recall being named as one of the 100 most powerful people in Chicago by Crain’s Chicago Business. I told the reporter that that had absolutely nothing to do with me and everything to do with McDermott Will & Emery, the institution.