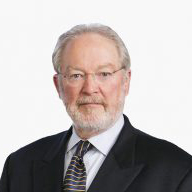 Mike began his career at McDermott in 1972 as a summer associate from the University of Michigan Law School. He has held many Firm leadership roles, including head of the Tax Practice Group, and has served on many committees, including Executive, Management, Compensation and Recruiting. At the time, he was the youngest person elected to the Management Committee. Now, 47 years later, Mike has transitioned to counsel at the Firm and is starting a new chapter.

Tell us about your first days at McDermott.

I started one day ahead of George Benson (Counsel, USIT), and Dave DeYoe (Counsel, Corporate) was also in my class. I thought that McDermott was the best firm for me as a summer associate, and I chose Tax because John Pennell (then head of the Tax group) asked me to join and I was afraid to say no.

What are some highlights of your time at the Firm?

There are many, but I would have to say that working with former Chair Harvey Freishtat to launch our strategic alliance with MWE China Law Offices in Shanghai in 2007 was a highlight. There was a lot of strategic thinking about where to open an office in Asia, followed by almost a year of negotiations. Since then, I have traveled to China to work with John Huang, head of MWE China Law Offices, and assist with integration and recruiting three to four times a year.

It was also especially gratifying to contribute to the growth of the Tax Practice Group and to help maintain its stellar reputation, along with many noted leaders in the tax field, while I was practice group leader.

In addition to tax work, you are known for your farm cooperative expertise, along with George Benson. What was your inspiration for that focus?

I’m from a rural community in southern Illinois, and one of my very first projects at McDermott was for a farm cooperative. And today, I still represent the Farm Credit System on behalf of the Firm.

You have a unique interest. Tell us about your love of flying.

When I turned 50, my wife and I purchased a home in northern Michigan, and I viewed that distance from Chicago as too far to drive regularly, so I got my pilot’s license. I have since owned four airplanes, the most recent of which I purchased in 2008. In 2009, I flew that plane around the world. It took five weeks. I had a co-pilot, but I did all of the actual flying. There are many stories that came out of that trip, but one involved some problems in Russia where I was required to divert to the Aleutian Islands. I called Bill Cohen (then counsel based in Washington, DC) from Russia, and he pulled some strings and got me a permit to land.

"It was also especially gratifying to contribute to the growth of the Tax Practice Group and to help maintain its stellar reputation, along with many noted leaders in the tax field, while I was practice group leader."

If someone had said to you, back in 1972, that you would spend your entire career at McDermott, would you have believed them?

Actually, I would, as it was not unusual in those days to stay at the same place for one’s entire career. I recall that when I joined, a majority of senior partners had all come to McDermott directly from law school or military service.

You are about to embark on a new journey. Can you tell us more about what’s next for you?

I am going to continue in my counsel role, primarily advising four clients, but that will not require my full-time attention, so I applied to and was accepted into the LLM program at the University of Michigan Law School, where I will study the philosophy of law. I will take courses in the law school and the university’s philosophy department. I think it’s a good bet that I will be older than all of my fellow students and all of my professors. After I receive my LLM degree, I will decide whether to continue and pursue a doctorate. I’d love to teach a class in the philosophy of law someday.

The daily commute from Ann Arbor to northern Michigan is too long, so I will be living in the Law Quadrangle, the dormitory for law students.

Your oldest granddaughter will be a freshman in college this fall, so you both will be moving into dorms at the same time. What does she think about this?

She knows me well, so she’s not entirely surprised.