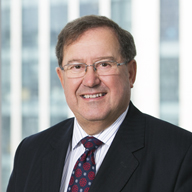 Which McDermott office were you in? What was your practice and tenure while at McDermott?

I joined McDermott as a partner in October 2009 to set up the London Private Client team with Andrew Vergunst. We had a lot of fun. I did that for six years, until my retirement in 2015.

Describe your career path. How did you get started in law?

I read law at Oxford University from 1964 to 1967, and then I joined a multinational firm in London. I became a partner there in 1973, when I was 26, and I stayed there for 42 years, until 2008. I was head of the private client practice and senior partner of the firm.

Tell us about what you are up to in your retirement.

When I retired, I gave up my solicitor’s practicing certificate and my chartered tax advisor’s certificate under the British Chartered Institute of Taxation. I do not give any legal advice now, but I have about six or seven charities with which I’m quite involved. I also have four or five families for whom I’ve been a trustee for a number of years, and they don’t seem to want me to retire, because I know where the bodies are buried.

"It was very satisfying to build up the London Private Client practice with Andrew. We started with the two of us plus one associate and the use of half of a trainee. By the time that I left, we were up to six or seven partners, about the same number of associates, plus several trainees, so we had grown the practice quite substantially."

What did you find most satisfying about your work at McDermott?

It was very satisfying to build up the London Private Client practice with Andrew. We started with the two of us plus one associate and the use of half of a trainee. By the time that I left, we were up to six or seven partners, about the same number of associates, plus several trainees, so we had grown the practice quite substantially. London is the world center for international private client work, and getting McDermott’s name out into the consciousness of the London private client advice scene was good fun. It was also particularly satisfying working with Terry Christensen in New York. Terry was my original contact at McDermott, and it was through Terry that Andrew and I both started at McDermott.

What are some of the biggest challenges you overcame in your career?

Keeping abreast of the continual changes in the law was a challenge. You could never relax for one moment. The world has changed so dramatically—it has shrunk, and that makes international private client advice really difficult. Every country has to look out for itself, and so it doesn’t think in an international way when it drafts tax laws. As a result, it is very difficult to make sure that clients who travel and live internationally are able to live without having to look over their shoulders every five minutes in fear of unexpected tax charges.

What career or personal moments are you most proud of?

I always reckon that you work to live, rather than live to work. My family is, and always has been, more important than my work, however much I may have been devoted to my work. I have three sons of whom I’m immensely proud.

Before my time at McDermott, the career moment that was the most challenging was when I found myself acting for the executors of Princess Diana’s estate a few weeks after she was killed in the road crash in Paris. There are not many private client lawyers who find themselves being the first item on all the radio and television channels, not just in the United Kingdom, but across the world.

What is your favorite memory of your time at McDermott?

The things that I remember were the times that we were acting for clients with an international focus, either across a telephone line or across a table in one of our offices, when we were able to work out a challenging situation and feel that we’d given the clients advice that made their lives easier—not just in one jurisdiction, but in two or possibly three. And it was satisfying working with brilliant lawyers in the McDermott offices in Chicago or New York or Los Angeles or San Francisco.

One of the things that I will recall from the McDermott experience was the fact that McDermott really did live up to its reputation as being the biggest and best international private client law practice. It has so much talent in its offices, and it takes so much care with giving good advice. I shall always be very proud of my time being involved with those people and being stimulated by their talent, and working with some amazing clients.

Do you keep in touch with former colleagues at the Firm?

Yes, I do. In fact, I was just about to email Andrew Vergunst today to wish him a happy New Year. He and I had lunch in the last 12 months, which was really nice.