On February 4, the FTC and DOJ temporarily suspended HSR early termination grants. The agencies cited the increased number of filings and the presidential administration transition as the reasons behind the temporary suspension. The agencies did not give a timeline for reinstatement, and will review the current early termination procedures and processes during the suspension period.

The healthcare industry likely will see an increase in M&A transactions this year after the sector took a beating in 2020 from the COVID-19 pandemic. The antitrust agencies, Congress and the Biden administration have indicated that healthcare mergers and acquisitions, including vertical transactions, will face increased scrutiny. The FTC has already announced several initiatives aimed at the healthcare industry.

In January, the FTC also announced a retrospective study by the FTC’s Bureau of Economics to analyze the effects of consolidation among physician groups and healthcare facilities from 2015 through 2020. The FTC issued orders to six health insurance companies to file special reports and provide data to aid the study. This may signal that the FTC is more likely to investigate and potentially challenge small non-reportable physician group and healthcare facility acquisitions.

In March, the antitrust agencies and state attorneys general announced their participation in a cross-border working group aimed at building a new approach to pharmaceutical mergers. The working group is spearheaded by the FTC and will include the DOJ Antitrust Division, state attorneys general, the Canadian Competition Bureau, the European Commission and the CMA. Among other issues, the working group plans to update theories of harm, assess characteristics of a successful divestiture buyer, and consider price-fixing and other “regulatory abuses” in merger review. One consideration that is likely to be part of this review is whether the traditional approach of evaluating transactions based on narrow product overlaps is the proper framework, or whether regulators should evaluate these transactions using a broader perspective.

We expect technology companies will remain under heavy scrutiny during the Biden administration. President Biden has nominated Lina Khan to fill one of the vacant FTC commissioner seats. An outspoken critic of “Big Tech,” Khan is well known for advocating that leading technology firms should be scrutinized for the alleged effect their conduct has on competitors. Khan has repeatedly argued for a departure from the consumer welfare standard, which is focused largely on prices to end consumers, and instead suggests that a broader framework of potential harms should be considered. On March 5, progressive antitrust author and law professor Tim Wu was named to the National Economic Council as a special assistant to President Biden on technology and competition policy. Wu is known as an outspoken critic of Big Tech and is an advocate for using enforcement power to break up monopolist firms.

Senator Klobuchar (D-MN) is leading an antitrust policy ramp-up that includes legislative proposals across the antitrust spectrum, including making it easier for the federal antitrust agencies to challenge transactions. For fiscal year 2021, Congress has approved a budget increase of $20 million for the FTC and $18 million for the DOJ Antitrust Division. The budget increase provides welcome relief to the antitrust agencies, whose resources have been taxed by aggressive merger enforcement, including several ongoing litigations.

The Competition and Antitrust Law Enforcement Reform Act of 2021, introduced on February 4, would increase the FTC and Antitrust Division budgets by more than $300 million each for fiscal year 2022. Among many proposed changes, the bill would lower the standard of proof for government enforcement actions by prohibiting mergers that “create an appreciable risk of materially lessening competition.” The current standard prohibits mergers where the effect “may be substantially to lessen competition.” The bill would also shift the burden of proof in certain enforcement actions from the government to the merging parties to show that the merger is not likely to materially lessen competition. Mergers or acquisitions subject to burden shifting include:

– Acquisitions by an acquirer with at least 50% market share

– Acquisitions of a “disruptive” firm by a competitor

– Mergers valued at greater than $5 billion, or involving acquirers with assets, net revenue or market capitalization greater than $100 billion.

These proposals, if ultimately enacted, would enhance the enforcement agencies’ ability to challenge and block large-firm transactions, in line with bipartisan calls for pushback on so-called unregulated monopolies, particularly in the technology sector.


During the Organisation for Economic Co-operation and Development’s “Open Competition Day” event in February, Pierre Régibeau, Chief Competition Economist of the European Commission, highlighted the Commission’s ongoing efforts to thwart so-called “killer acquisitions” of green innovators, i.e., acquisitions of disruptive green start-ups. Companies contemplating an acquisition of an innovative green competitor with a view to reducing their own need to invest in sustainable technologies should carefully consider the risks of increased Commission scrutiny before proceeding with a transaction.

Régibeau also explained that the Commission has been developing tools to better analyze and measure “green efficiencies” (such as a reduction in CO2 emissions) that may offset the negative impact of a merger on competition. Such efficiencies tend by definition to be “out-of-market”, i.e., outside the relevant market on which the competition concern arises, and affect society as a whole rather than only those consumers purchasing the relevant product and directly impacted by the transaction. However, according to Régibeau, even if environmental “out-of-market externalities” are taken more seriously, in practice the Commission’s review of mergers is not expected to change significantly. This is because the assessment of efficiencies will continue to be conducted on a case-by-case basis and efficiencies must be merger specific. Green efficiencies are unlikely to be merger specific and often can be achieved through looser types of collaboration between companies, such as a licensing agreement.

In March, following a public consultation and extensive analysis of deal activity and enforcement practice, the Commission published the findings of its evaluation of the functioning of the EU merger control rules in light of rapidly changing market realities. The Commission launched the study in August 2016. The Commission found that its turnover-based jurisdictional thresholds have been effective in capturing mergers that may have a significant impact on competition in the European Union, but recommended expanding the application of the Article 22 EUMR referral mechanism to enable the European Union to review smaller transactions that may not meet the current filing thresholds. The Commission further recommended reducing the scope of information required in simplified procedures.

Regarding the simplification of EU merger control review, the Commission’s evaluation concluded that the 2013 simplification package has been effective in increasing the use of simplified procedures in unproblematic mergers, thereby reducing the administrative burden both for businesses and the Commission in terms of resources and time. However, according to the Commission, there is scope for a further reduction in the amount of information required in a simplified case. The evaluation showed that the turnover-based jurisdictional thresholds, complemented with the referral mechanisms, have generally proved effective in capturing significant transactions in the EU internal market. The Commission also found that it needs to change the “restrictive approach” it has traditionally adopted towards accepting referrals by Member States under Article 22 of the EUMR because so-called killer acquisitions often fly under the merger control radar.

The Commission’s policy has been to discourage the use of Article 22 EUMR in merger cases that were not notifiable under the laws of the referring Member State(s) and thus unlikely to have a significant impact on the internal market. Recently, however, there has been an increase in the number of mergers involving companies that have or may develop a significant competitive role in the market, despite generating little or no turnover at the time of the merger, particularly in the digital economy and in the pharmaceutical sector. Such transactions often escape assessment under national merger control rules because one of the parties has little or no turnover.

On March 26, the Commission issued practical guidance on when it might be appropriate for a Member State to refer such mergers to the Commission, with a view to ensuring that non-notifiable yet potentially problematic mergers undergo competition review. The Commission encourages referrals particularly where one party to the transaction:

– Is an important innovator or is conducting potentially important research

– Is an actual or potential important competitive force

– Has access to competitively significant assets (such as raw materials, infrastructure, data or intellectual property rights)

– Provides products or services that are key inputs/components for other industries.

Since transactions involving nascent competitors—especially those in the digital economy and pharmaceutical sectors—are now more likely to be referred to the Commission for merger control review, merging parties may wish to preemptively approach the Commission to solicit an early indication of whether their intended transaction constitutes a candidate for referral under Article 22 EUMR.


In March, the CMA published revised merger assessment guidelines reflecting significant market developments since it last issued guidance in 2010. The updated guidelines clarify that the notion of “substantial” in the context of a substantial lessening of competition (SLC) is to be assessed on a case-by-case basis. Notably, the guidelines provide that an SLC may be considered “substantial” even if the relevant market (or a segment thereof) is small in total size or value. The CMA may also take into account whether the relevant market is large or is otherwise important to UK customers, or whether there is limited competition in the market.

The CMA provided a non-exhaustive list of SLC scenarios in the updated guidelines, including where:

– The merger involves the market leader, and the number of significant competitors is reduced from four to three.

– The merging parties are close competitors in a differentiated market.

– Absent the merger, one of the merging parties would have entered or expanded and could become a strong competitor to the other party.

– The level or pace of future innovation or product development is threatened by the merger.

– The merger would prevent effective competition in other markets or services even nascent at the time of the merger.

– The merger would strengthen one or more of the conditions for coordination in the market.

– The merger between companies at different levels of a supply chain is expected to lead to the foreclosure of an important rival.

The CMA has also clarified that the SLC examples provided in its updated guidelines are merely indicative and do not constitute an exhaustive list of scenarios.

The CMA recognizes that the sustainability of a product or service is a “non-price” factor that may be considered a constitutive element of its “quality.” Environmental benefits, such as a reduction in carbon emissions, can therefore be considered a “relevant customer benefit” and could negate a finding of an SLC or be relevant when considering remedies. In this respect, the CMA will assess how such benefits would apply to “direct and indirect consumers” or “future customers,” and to society as a whole.

By providing more room for merging parties to invoke “green arguments,” the CMA takes a different approach from the Commission, which has stated that, in practice, it will not change the way it reviews mergers significantly, even if green efficiencies are taken more seriously. This difference in approach could result in conflicting findings in parallel merger reviews of the same deal by the Commission and the CMA post-Brexit. 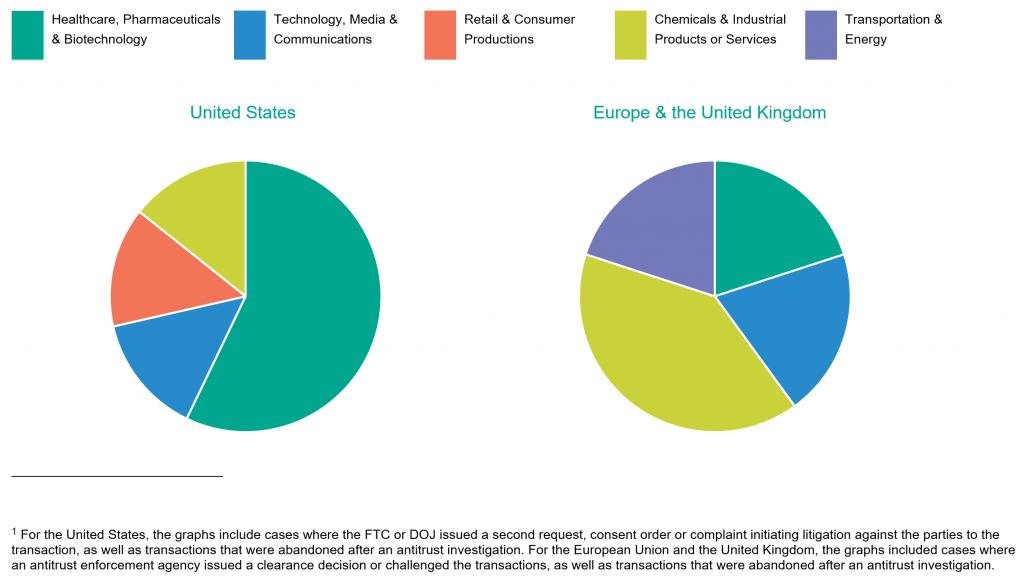 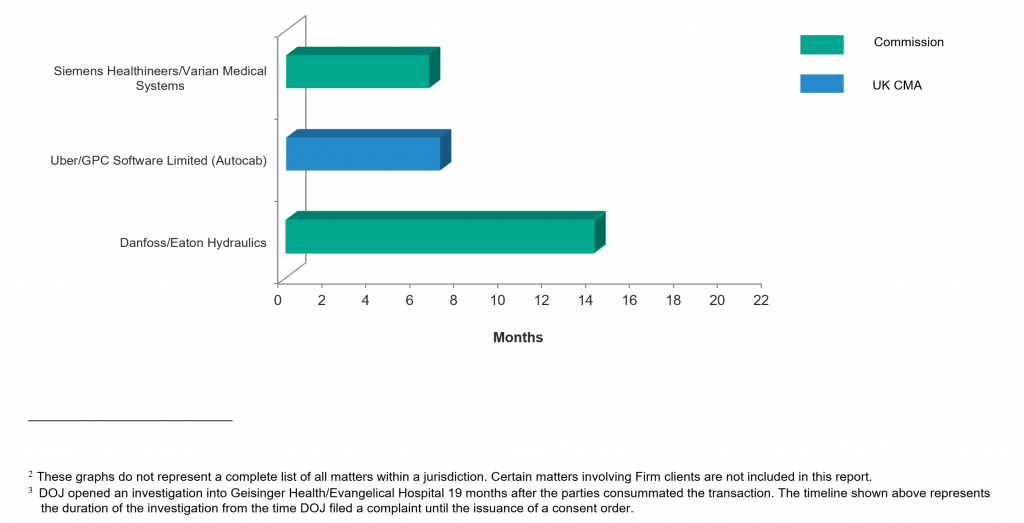