In the first quarter of 2019, the European Commission (EC) closed and cleared six merger control proceedings where remedies were required, including acquisition by global players such as BASF and Spirit. The EC also prohibited two mergers, which is highly unusual, stating that the proposed remedies were not sufficient or too complex to address its competition concerns. Although the German and French governments placed political pressure on the EC to approve the Siemens/Alstom railway products transaction, the EC blocked the transaction, reaffirming that industrial policy objectives have no role to play when it comes to applying EU merger control rules.

On February 15, the FTC announced new thresholds for premerger notification filings under the HSR Act. The FTC revises the HSR thresholds annually, based on changes in the gross national product. The revised thresholds became effective on April 3 and apply to all transactions that close on or after that date. The “size of transaction” threshold increased from $84.4 million to $90 million. Other thresholds increased as well, including the thresholds for the “size of person” test and for determining filing fees.

In a growing number of cases, parties have sued one another after their deals have failed to close for antitrust reasons. These cases have involved allegations that parties did not use their “best efforts” to obtain antitrust clearance or intentionally sabotaged the deal. In one case, a buyer brought suit against the seller while the parties were still defending the deal, claiming that the seller was unreasonably prolonging the antitrust approval process.

On February 26, the FTC announced the creation of a technology task force dedicated to monitoring competition in US technology markets, investigating any potential anticompetitive conduct in those markets, reviewing consummated transactions in high-tech industries and taking enforcement actions when warranted. The new task force team will include approximately 17 staff lawyers, who will join the team from other divisions within the Bureau of Competition. The task force is modeled on the FTC’s Merger Litigation Task Force, launched in 2002, which reinvigorated the FTC’s review of hospital mergers.

At the DOJ agency update at the yearly ABA Antitrust Spring Meeting, Deputy Assistant Attorney General Barry Nigro said the Antitrust Division has been abiding by its plans for streamlining the merger review process. Since announcing its goal to resolve merger investigations within six months, the DOJ has received 30 HSR filings leading to investigations. Nigro stated that all of these investigations were completed or are on track to be completed within six months. In addition, DOJ has not exceeded the deposition limit set out in its new model timing agreement and has exceeded the document custodian limit only three times.

Also on February 15, Antitrust Attorney General Makan Delrahim gave a speech on the elimination of double marginalization (EDM) in vertical mergers. Delrahim stated that he supports a legal test for vertical mergers that takes EDM into account as an affirmative defense. However, he emphasized that because not every vertical merger results in EDM, parties have the burden to come forward with evidence demonstrating the existence and size of this efficiency. Specifically, parties must show that they were able to charge prices above marginal cost pre-merger and that they have been unable to eliminate the double marginalization through contract. In addition, parties must present evidence of how much the EDM is likely to benefit consumers, given the shape of the downstream demand curve. Delrahim urged courts reviewing vertical mergers not to assume consumers will benefit from EDM and to require defendants to put forward the types of evidence that he outlined.

Two recent mergers, Staples/Essendant and Fresenius/NxStage (described in greater detail below), revealed disagreement between the Republican and Democratic FTC commissioners on the proper approach to vertical merger enforcement. In both cases, the two Democratic commissioners, Rohit Chopra and Rebecca Kelly Slaughter, dissented, arguing that the consent orders approved by their Republican colleagues did not go far enough in addressing the likely vertical harm. The commissioners wrote at length in Staples/Essendant about their general views on vertical merger enforcement. Commissioner Slaughter argued that the FTC’s current approach has led to substantial underenforcement and suggested that the FTC conduct retrospective investigations of “close call” cases. The Republican majority defended its approach to analyzing vertical deals and emphasized that the FTC will only bring cases where its theories are supported by the facts.

At a roundtable at the ABA Antitrust Spring Meeting, Makan Delrahim showed willingness to work with the FTC on updating the DOJ’s guidelines for vertical mergers. The DOJ has been working since last year on a revision to its Non-Horizontal Merger Guidelines issued in 1984. Delrahim stated that a joint product between the DOJ and FTC would be better because it would draw from the experience of both agencies, although he noted that the agencies have not yet shared drafts. FTC Chairman Joe Simons said that he would like any new guidelines to have broad, bipartisan support.

On March 5, the Council of the European Union concluded the legislative process for the Regulation 2019/452 establishing a new framework for the screening of foreign direct investments (FDIs) into the Union. The main objective of the new framework is to ensure security and public order in the EU while leaving scope for Member States to screen FDIs in light of their individual situation. The Regulation does not have as its objective the harmonization of national screening mechanisms, but the enhancement of cooperation between Member States, and between Member States and the European Commission (EC). The final decision on a transaction remains with the Member States, as the EC has no power to block an investment.

On February 6, the EC took the unprecedented step of blocking two mergers on the same day. The EC has only blocked a merger seven times over the past 10 years. First, the EC prohibited the proposed acquisition of Aurubis Rolled Products and Schwermetall by Wieland. Aurubis and Wieland are two of the three biggest producers of rolled copper products, and with the merger, Wieland would have become the dominant player in this market. The EC found that the remedies offered by the parties were not sufficient to address its concerns that the merger would harm competition and raise prices for industrial customers. Second, the EC prohibited the proposed acquisition of Alstom’s rail transport business by Siemens, stating that the merger would have harmed competition in markets for railway signaling systems and very high-speed trains. The EC found that the parties’ proposed remedies were too complex, inadequate and late. The EC reaffirmed that industrial policy objectives have no role to play when it comes to applying EU merger control rules.

On February 19, France and Germany published a joint manifesto calling for a European industrial policy and strategy with clear objectives for 2030 built on three pillars. The first pillar is for the EU to invest in innovation. The second pillar is to adapt the EU regulatory framework. In particular, merger control rules should take into account industrial policies and should be more flexible when assessing the market definition, while giving the EU a right to appeal of the EC’s merger decisions. State aid rules should also be updated to facilitate member states financing major projects. The third (and last) pillar gives measures to protect European markets, technologies and companies by urging member states to implement the new European foreign investments screening framework, or by encouraging an effective reciprocity mechanism for public procurement with third countries.

On January 28, the EC published a report summarizing the activities of both the EC and national competition authorities between 2009 and 2017 in the pharmaceutical sector. The EC found that generic and biosimilar medicines are the only source of price competition when the product is no longer patent protected, and that innovation was of key importance in the sector as it leads to new, more effective or even cheaper medicines. The EC thus found that companies had to constantly innovate to remain competitive and that they were setting up anticompetitive strategies to ease the pressure and delay generic and biosimilar entry on the market. The EC therefore concluded that competition authorities had to be vigilant when assessing mergers and when investigating competition law infringements (such as pay-for-delay agreements or unfair pricing) in the pharmaceutical sector. 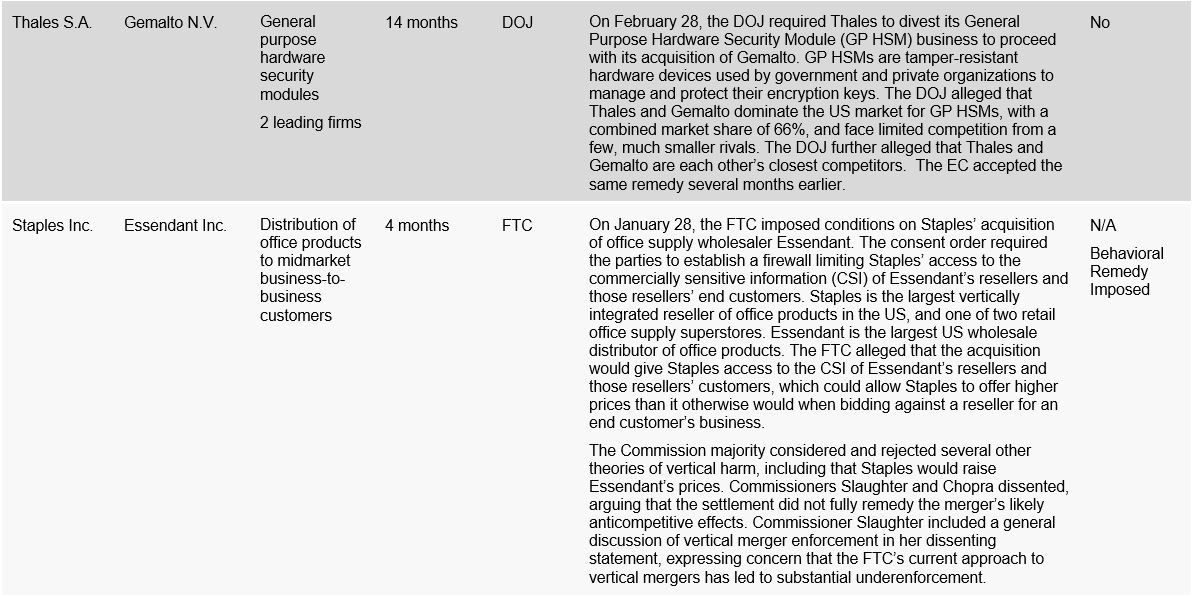 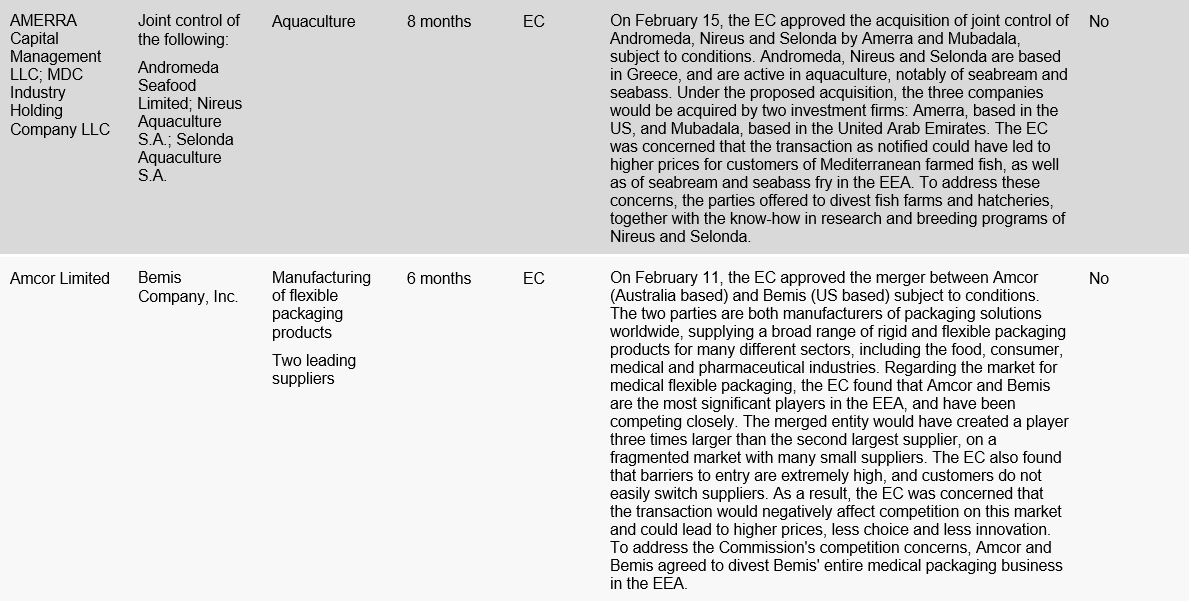