On March 27, 2020, President Trump signed the Coronavirus Aid, Relief, and Economic Security Act, or CARES Act, into law in response to the COVID-19 pandemic. Among other healthcare-related provisions, the CARES Act addresses topics relevant to the US Food and Drug Administration (FDA), summarized here.

The CARES Act amends section 506C of the Federal Food, Drug, and Cosmetic Act (FDCA) to require manufacturers of either (1) any “drug that is critical to the public health during a public health emergency” and (2) active pharmaceutical ingredients (APIs) used in any such drug to notify FDA of a “permanent discontinuance of the manufacture” or “interruption in the manufacture” of the drug or API, respectively. FDA previously only required manufacturers of drugs characterized as “life-supporting” drugs, “life-sustaining,” or “intended for use in the prevention or treatment of a debilitating disease or condition” to report drug shortages. At a minimum, manufacturers must identify:

Additionally, manufacturers of the above-described categories of drugs (including biologics) or APIs must create and maintain a redundancy risk management plan. This plan, subject to inspection by FDA, must identify and evaluate risks to the supply of the drug for each establishment.

As discussed below, the CARES Act also amends section 506C(g) of the FDCA to require FDA to expedite and prioritize the review of drugs if the agency concludes there is, or there is likely to be, a drug shortage.

Notably, the CARES Act creates a new section 506J of the FDCA, which requires medical device manufacturers to report potential shortages or supply chain disruptions. As we previously discussed, there had been no analog to the drug shortage reporting requirements under FDCA 506C. Manufacturers of devices (1) “critical to public health during a public health emergency, including devices that are life-supporting, life-sustaining, or intended for use in emergency medical care or during surgery” or (2) for which FDA determines that “information on potential meaningful supply disruptions is needed during or before a public health emergency” now must report permanent discontinuances (except to the extent they result from an approved modification to the device) or interruptions likely to lead to a meaningful disruption in the supply of that device in the United States. Manufacturers must submit the notification, which includes reasons for the discontinuance or interruption, at least six months before the date of discontinuance or interruption or, if that is not possible, as soon as practicable.

As with drugs, FDA may prioritize and expedite inspections, premarket reviews or other submissions to FDA in the event of a shortage and may make a device shortage list available to the public.

Coverage of Testing and Preventative Services

The CARES Act establishes section 505G of the FDCA, which clarifies the FDA approval process for certain over-the-counter (OTC) drugs marketed without an approved drug application under section 505 of the FDCA.

The CARES Act establishes a mechanism for FDA to issue administrative orders determining whether there are conditions under which drug products are either:

The administrative orders mechanism is meant to speed up the OTC Drug Review process, which previously involved a time-intensive three-phase rulemaking process to evaluate the safety and effectiveness of OTC drug products marketed in the United States before May 11, 1972. The advisory review panel for the first phase classified these OTC drugs as Category I (generally recognized as safe and effective (GRASE) for the claimed therapeutic use), Category II (not GRASE or unacceptable for the claimed indication) and Category III (those for which insufficient data was available to permit final classification).

The second phase involved FDA’s review of active ingredients in each class of drugs. Based on this, the agency published its conclusions in a tentative final monograph (TFM), subject to public notice and comment. The third and final phase was publication of final regulations in the form of OTC drug monographs. Any product containing active ingredients or indications not within this monograph require an approved new drug application (NDA) for marketing. 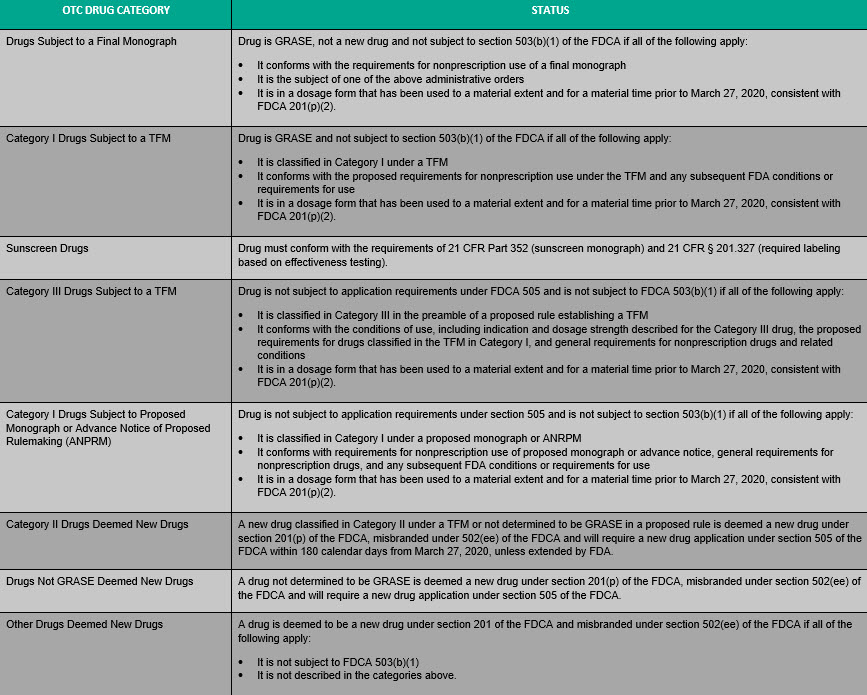 The CARES Act established an OTC Drug User Fee, subject to reauthorization in 2025. The new sections 744L to 744N apply to facilities identified as “OTC monograph drug facilit[ies]” and contract manufacturers of OTC drugs, as well as to those that submit an OTC monograph order request. The provision is a longstanding agency priority to improve oversight of OTC drugs through additional resources.

Under the CARES Act, manufacturers of OTC drugs could obtain 18 months of market exclusivity for their products, which could spur OTC drug innovation.

The CARES Act also creates section 512A of the FDCA, which allows expedited review of animal drugs through the new Priority Zoonotic Animal Drug designation. The designation is intended to address zoonotic diseases, diseases that spread from non-human animals to humans, before they cause harm to humans. This may be significant, as several of the most serious epidemics and pandemics of the 21st Century have been or are thought to be zoonotic diseases, e.g., swine flu, avian flu, severe acute respiratory syndrome (SARS), Ebola and COVID-19.